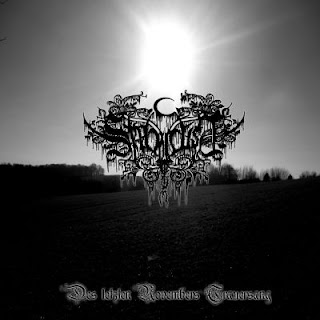 For those who listened to Von Trauer, Zorn und Vergangenen Zeiten and craved more, I am glad to say that Germany's own depressive black metal act, Stardust, retaliate once again with the release of the second demo, Des letzten Novembers Trauersang.  This second record was released on December 31, 2011. In addition, members Sarghas and Nattestid have recruited a third member in Nordmann. Other changes include the design of bands new logo.  It looks vaguely familiar but let's not rant on about logos.  The cover art is immaculate and so is the music produced.  Just like the first record, this new demo follows its predecessor but in a slightly darker way with a few changes.

One big improvement that I must first mention are the black metal vocals of Nattestid. Wow, props to this mate.  Nattestid never sounded so inspiring and hellish at the same time.  The energy he produces in his vocals are of high emotions on this demo and it is noticed big time.  Going on to the music, Stardust produces five exuberant tracks together totaling to about 33 minutes in counting of emotional, depressive black metal.  This is pretty much a continuation of Von Trauer, Zorn und Vergangenen Zeiten yet a bit darker in my opinion. While Von Trauer, Zorn und Vergangenen Zeiten did bring out more mellow softer parts,  Des letzten Novembers Trauersang is a bit more aggressive with the music.  That's not to say that those softer mellow, beautiful parts are not present here because they are.  I've also noticed that the transformations in songs are done in a more mature manner.  Take for instance the track, Von Trauer, Zorn und vergangen Zeiten, not to be confused with the title of the first demo, which is actually quite funny, but going back on point, the bands musicianship flourishes as its begins in a mellow, beautiful, and majestic manner yet only leading you to a magnitude of black metal melancholy and then transforming yet again into a symbiosis of pulsating black metal. Of course all the tracks are nurtured with deep, dark, aggressive riffs. Some will haunt you with its serene melancholy and others will have you head banging until you get whip lash.  The acoustics, piano, and more softer parts are found throughout the record as well so those craving more atmospheric or mellower parts, you need not worry. You can also find some experimentation moments like on the track, Trugbild einer welken Rose, which is pretty much an instrumental piece full of avantgarde-esque elements with a hint of neofolk at times.  Nevertheless, all the tracks deliver in their own sort of way.  Some are more traditional, some are beautiful, and some are a hellish beast. All ingredients needed to make a great depressive black metal record are here.

Once again, Stardust manages to captivate the listener with omni-directional composures and top notch musicianship. When comparing to the previous demo, this record is definitely more mature and a bit more memorable with no disrespect to the first demo. That demo did have its defining moments as well.  They are both great records in their own way.  Thus far, I have enjoyed everything Stardust has put out.  I can only hope that they get more exposure amongst underground extreme metal fans.  This band is slowly rising to the top of the genre and they are riveting all other watered down clones with their more unique style. Those who haven't checked out Stardust, I suggest you do. This is one band to have all ears on.  To the future of Stardust, may you continue on your path to salvation with your sound.  Cheers.