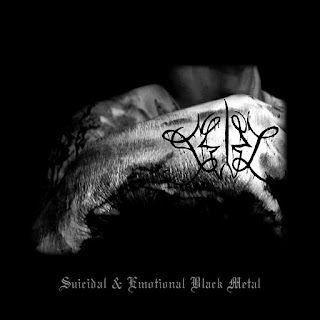 When it comes to black metal from France, I will be one of the those people who will listen in regardless of what people say about a band. There's just something about French black metal that gets me all the time especially on the artistic nature level of the music. So it comes to my attention that I found yet another good band, that band being Seul. Seul. is a one man ambient/atmospheric/black metal band from France. M. Seul is the heart and soul of Seul. The first demo, Suicidal & Emotional Black Metal, was released in early 2009.

Suicidal & Emotional Black Metal brings us 5 tracks of aggressive yet emotional compositions. Act 2 displays an aggression of power with hard blasting drums and dark hateful melodic guitars. There is a lot of chaos throughout this 11 minute track. There is a brief slow down in the middle with random riff notes but then back to the chaos in which it came from. This track is pretty much a chaotic instrumental with no vocals. Not a bad opener. Now that chaos has been unleashed, the next track, Act 3 pt.1, unveils a more atmospheric and beautiful track. Dark acoustics and clean guitars bulk the track with its repetitiveness carrying along a melancholic yet beautiful constant flow. Vocals are finally introduced. Vocals are mostly blackened but there are times when there is a need to cry for help with some high raspy ones. I really have no other way to describe this track, just to say beautiful and alluring at the same time. Act 3 pt.2 is pretty much a continuation of the previous track hence pt. 2. Still carrying the same repetitive yet beautiful sound as before, this track takes it a step forward adding a nice flow of guitars and solos we didn't here in the previous track. To be honest, it's the same track but more up front and carries a more daunting sound. Act 4 starts off eerie and soft but quickly becomes a monster of madness. This tracks brings forth a darker sound to the table with dark clean guitars throughout accompanied with a more devilish atmospheric sound. This is a very haunting track. Act 5 is another raging bull ready to strike but can calm down with its slower and more tamable atmospheric parts. Act 5 pretty much sums up all the acts into one final conclusion and does a good way of ending it especially as it goes near the end. Now, that's a wrap!

In the end, Suicidal & Emotional Black Metal delivers with its aggressive speed and sound and it proves that it can also capture us with its more daunting and somber moments, thus suicidal and emotional black metal.

Email ThisBlogThis!Share to TwitterShare to FacebookShare to Pinterest
Labels: Seul.