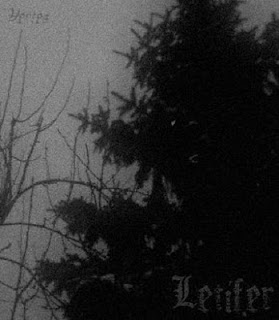 Letifer is a one man black metal band from Hunguary formed in 2009. All instruments and vocals are done by Necrof. Vertes is the first demo from Letifer. Destructive is what describes this demo.

The Intro is a short piece with distorted electric acoustics, and evil screams. In comes the raw sound of Égi háború. Égi háború demonstrates old school sounding riffs and fast blast beats. The vocals are very raw and primitive as well. If you listen closely to this song, it's a pretty classic black metal song. Vihar introduces the melancholic sounds of Letifer. While taking some elements from the depressive black metal genre, the song remains at a fast paced constant black metal flow until near the end where it slows up a bit. Nice little change there. Vértes is the chaotic beast of the demo. It includes fast paced beats, utterly distorted vocals, and that raw straight forward black metal sound at a nonstop level. Öncsonkítás comes in with a thinner production and some pretty killer and barbaric black metal riffs. Overall all probably the best song on the demo. This should be a favorite for old schoolers.


Two words can describe the sounds of Letifer. Chaotic! and Raw!

Letifer has a new demo coming out soon in 2010. Necrof has a new song entitled Leteztem en on the band page and I like that song better than anything on this demo. Hopefully, Necrof will continue in that tradition. Despite the sound of this demo which was rather bland, I look forward to the new demo from Letifer.

Email ThisBlogThis!Share to TwitterShare to FacebookShare to Pinterest
Labels: Letifer