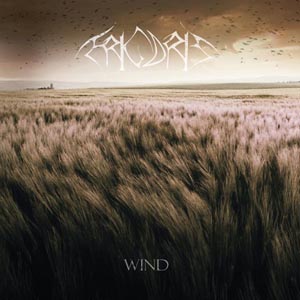 Frigoris began as a pagan black metal band but then later added in an array of elements as head, Dominik Winter, thought the band could do more, and so it has become something much more. Wind was proposed to be by the band and I am sure glad they did.  Before then I had no idea the band existed but now I am becoming an avid fan of their work.  As time went on I caught myself listening to the new album, Wind, time and time again.  The musicianship is of first-rate class.  The band currently describes their music as melodic black metal to its highest level and it is just that.  Add in the melancholic touches, some catchy melodies, luminous atmosphere, and that is the intense sound Frigoris brings out.  While I cannot speak the first full length, Nach dem Krieg, I can speak for Winds and the sound is astonishing. Wind is probably one of the most intense black metal albums I have heard this year.  You can tell that the band doesn't goof off and are very creative in their work. Frigoris are Dominik Winter(vocals, guitars), Raphael Huser(guitars), Pelle(Drums) and I believe it was Melanie Schmit who handled bass as she wrapped up with the band. Wind was released on May 2013 by Hynotic Dirge Records (Canada) and also Misanthropic Art Productions (South Korea).

If you want me cut to the chase and spare you a read the two best words to describe the album Wind are EPIC and MAJESTIC!  Seriously never have I heard so much effort, heart, and emotion put into one album but this is it.  And I am not talking about three or four tracks, I am talking about it all. There are just so many elements proposed that can attract any extreme metal fan.  From the heathens, to those more of the melancholic nature, or to those who enjoy a strong and intense black metal sound, this is all for you into one stellar album.  From the beginning sounds of the acoustic, Windgeflüster, and all the way down to the path of the end, Wenn die Maske bricht, it will have you at grasp the whole time.

The melodic guitars are what steal the show but it's the luring atmosphere and melancholic touches that complete it in perfect resonance. Add in a few female vox too. I could go through every track one by one but I only choose not to because this would be never be finished..ever.  One can go on, on, and on on how miraculous this album is.  So instead I will leave you in a mystery because it doesn't matter what I say this album is a must listen for every extreme metal fan. Excellent musicianship to its highest level indeed. It will surely leave you speechless and I dare you to prove me wrong! Everyone needs check out this band and album immediately and be glorified.

Email ThisBlogThis!Share to TwitterShare to FacebookShare to Pinterest
Labels: Frigoris