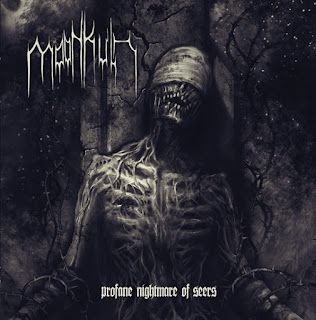 1. Destined to Wander
2. The Great Purge
3. Demigod Seer of Black Flames
4. Curse and Blessing of Foresight
5. Nether of Time and Space
6. Storming Avalanche of Hate
7. Behind Vortex of Lightnings
8 .Beyond to Infinities

Moonlord Akhkharu began Moonkult back in 2011.  Due to the modernization of black metal these days, his ideology was to create black metal music coming back from the early 90's.  The Tears of Seers demo was released in the summer of 2012.  Of course that was back then it was a one man project.  Tears for Seers showed a promising work for the project Moonkult.  Sometime after the release of the demo Moonkult became a trio which included creator Moonlord Akhkharu, Niflungr of Azaghal on bass, and Riku Polameri of Malicious on drums all who hail from Finland. Moonkult finally had the members and ingredients to make a stellar black metal album.  Moonlord Akhkharu could now concentrate on the guitars even more, bass was now presented in a good fashion the solid drum work of Niflungr adds much more than what the demo was trying to accomplish but then again the demo used a drum machine.  All members could now utilize their talent to its fullest potential and that is what makes Profane Nightmare of Seers a killer black metal album.  Profane Nightmare of Seers brings forth an instrumental, Destined to Wander, and seven tracks of chaotic and intense black metal for the masses to behold. Profane Nightmare of Seers was released in April 2013 and thus a black metal storm was unleashed across the fjords of Finland!

To surmise the sound produced on Profane Nightmare of Seers, it can be described as primitive musical compositions varying from the early years thundering and clasping into one hell of black metal storm.  One element that I think they could of improved on was atmosphere.  I wouldn't of mind a few early wave synths to entice the music just a little.  Destined to Wander was great at getting that sound out just right.  Everything else is pretty much aggressive riffs with a few minor progression changes and what not.  Don't get me wrong, the music shows effort but it really is hard when a person can't decipher one song from another.  There are a few memorable parts but sometimes there is just too much bedlam for one to intake and it can start to get a bit dull.  The bass picks of Niflungr stand out as you can hear it sometimes thick and sometime thin throughout this enraged album. And the drums, bombastic, carnage, speed, blast beats, and more.  I really do admire the vox style and the concept of the album lyric wise.  It's like little short stories being told to the destructive sounds of the band and I am sure that was the intention.  Again, chaos and destruction is what you get with this release.  Some might love this and some might just say that there is way too much pandemonium going on but isn't that what black metal was intended for?

Fans of primitive black metal this is your calling.  Sit back, relax, and be prepared for the storm!

Email ThisBlogThis!Share to TwitterShare to FacebookShare to Pinterest
Labels: Moonkult