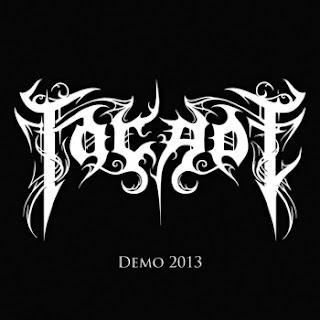 
Façade is a doom metal outfit from the Netherlands that was formed in 2011.  Years later in 2013, the band have finally released a short demo of what is about to come. The band construes their sound as atmospheric, melodic doom with rhythmic progressions. So do they live up to their word?  For the most part yes they do accomplish that but to a bit just above an average sound.

While the band really doesn't introduce any new elements to the genre, they do show potential with this sound as is it is beautifully done from within. The two tracks on the demo drift really nice and show a promising outcome of morose melody. Both tracks start with a somber and mellow acoustic melody and then they go into a doom frenzy of sorts.  Listen is a typical doom track with some nice and dark melody but it is To My Beloved One that is the more superior with its heavy riffs, progression, melodic guitars, and vox styles.  I adore how the vox varies from deathy grunts to sometimes blackened vox creating a nice touch of the two in their sound. The musicianship is probably mediocre at best with some killer guitar shreds here and there. Bass is audible in various places and drums accompany the melody in perfect harmony.  The two tracks go for about a total of 15+ minutes.

Even with a two track glimpse on the demo, it is hard to say where the band will go next with its sound. Again, it does have very promising potential but the band just needs to try a bit harder. I guess we shall see what happens next. Perhaps another demo or full length is in the works and if that is the case I sure hope the band goes all out. For those interested, you can hear this demo or download it for free on the bandcamp page.

Review by Freddy Garcia
at 3:49 AM

Email ThisBlogThis!Share to TwitterShare to FacebookShare to Pinterest
Labels: Façade